Affordable Housing for the Poorest of Poor

The physical implementation of the project- building 70 Ikhayalami type shelters- only began in September, but it will be completed by December. Thus far, only 12 out of the expected 70 shelters are built, but due to the nature of the design and the shelter being quick and simple to erect, the rhythm of two shelters per day can even be increased. The delay is caused by the many difficulties this project faces in a subsidy-environment. Meanwhile, there have been other quantitative and qualitative outcomes of this project. The community members in Sheffield Road have been actively involved in all aspects of the development from conceptualizing, designing, making financial contributions and the building of their new shelters. Local government has agreed to fund the provision of basic services, in particular the provision of 15 water borne toilets and three standpipes. As a result of the partnership, the City of Cape Town are challenging policy so as to enable the electrification of informal settlements that are located on a road reserve. The material supplied by Ikhayalami is sufficient to provide the four walls of a shelter. As part of their own contribution the residents use their old materials for the roofs, windows and doors. Contact: Andy Bolnick andy@ikhayalami.org 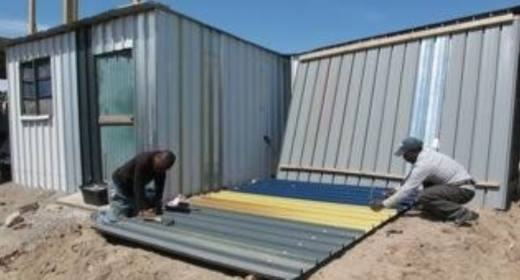